My son was born perfect. Like any other parent would think (and know), their child is perfect. All of their imperfections don’t matter because to you, they are and always will be perfect.

My son was also born with hearing loss. He has a bilateral mild to moderate permanent hearing loss. What does that even mean? Will he ever hear normally? Will he need hearing aids? Will he have normal speech? What happens next? These are all questions that ran through my head as my four day old baby was taking the newborn hearing screening. I could feel my face getting hot as my eyes filled with tears. I was scared. The nurse told me not to worry, a lot of babies fail their newborn hearing screening and pass it when taken again, in two weeks.

The next two weeks were long. We went back for the second screening. This screening takes ten minutes, and it felt long. He failed again. In both ears. We were referred to a hearing center for a special test called an ABR. Now this test is actually long. Like three hours long. So my fiance and I sat through two of these bright and early in the morning. The first time we were told that it seemed like he had a moderate hearing loss in his left ear, but that the right couldn’t be tested yet because there was some fluid in it. We were to come back in a month for him to be retested. I asked what the likelihood of him having the same level of hearing loss in the other ear was. Her answer? Very likely. My heart was broken. My face was hot and I could feel the tears again. How could this happen? This isn’t genetic, is it? What do we do? Beneath my broken heart, I knew he was still perfect.

Broken heart? Why? Broken because I knew that there would be so many difficulties he would have to overcome as an individual. So many hard days ahead. What parents want that for their child? None. No parent wants that.

Well she was right. He had a moderate hearing loss in both ears and yes, it is permanent. I thought how could this be? He jumps when the dog barks? He can hear can’t he? What can he hear? What can he not hear? The doctor told us it would be hard to know what he can hear until he can tell us what he can hear. The best she could do was to tell us that without the hearing aids, he would hear speech and other sounds like he was under water.

At this point we went ahead and made him ear molds for hearing aids. The audiologist offered us different colors and patterns that we could add to the ear molds but we didn’t want that. We wanted them to be as discrete as possible, so we had them made clear. This took about 6 weeks for them to be made and come in as well as get an appointment to actually have them fitted. And on April 27th, 2017 my son’s life changed forever. He could finally hear.

This video shows his smirk and coos after having the hearing aids put in.

From this point it forward, we were given the tools to help him to hear… but he didn’t wear them. It was hard to get them in, it was a struggle, and I didn’t want people to judge him or us, and I just wanted to see his perfect ears, just the way God intended them to look: device free. It was hard. I was in complete denial. God might have made my son with “normal” looking ears, but he did not intend on them being device free.

After he turned 1, he started to rip them out more than ever before when we would put them in. This was more of a reason for us to not put them in. My mom was then on the hunt to find things that allowed him to keep his hearing aids in without ripping them out. She found hearing aid hats and headbands. That was the last thing I wanted my son wearing. If people didn’t look when he just had his hearing aids in, they were definitely going to stare at our baby boy in a hat or headband.

Our audiologist would yell at us that he wasn’t wearing them enough. So I gave in. About a year ago I bought those stupid hats and headbands. I was going to show our audiologist that he wore them, and that he would wear them a lot. And he did. His usage increased from 2 hours a day to four, then five, then seven. The number just kept rising. The hats were working. The headbands were working. 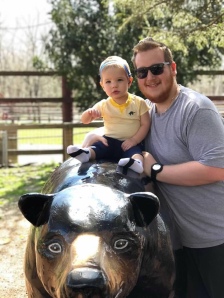 The hats and headbands were purchased off of Etsy from shops LilNells, AnchorYourHearing, and HeadbandsForSophia. We also bought the dinosaur hat from another shop that has closed, but that was a favorite. I really enjoyed all of these products. My favorite hats came from LilNells. The quality was above that of the other hats and the patterns to choose from were incredibly cute. However, I preferred the solid colored hats because I was able to better match them to his outfits. After ordering the hats, I became comfortable with him wearing them. We then decided to venture into different ear mold colors! Over the last two years, his hearing loss has taught us so much. We have learned a great deal of sign language and have learned of many things having to do with the Deaf and Hard of Hearing community. Our best and favorite resources are Early Intervention and their speech therapists. We also love the woman that comes from a local school for the deaf. She has been such a wealth of knowledge. Also, my good friend Sam has a wide range of information on this topic since she is studying to be an audiologist. Your nonstop support through this long journey has not gone unnoticed.  Our favorite resource is Baby Signing Time. We have learned A LOT of sign language through these DVDs and the school for the Deaf and my friend Sam. Thanks to all of these people and resources, my son now has normal speech and “talks up a storm” both verbally and through sign language.

Our journey with hearing loss has just begun and I’m sure there are more obstacles to overcome but we are ready because, my child is perfect.

Published by The Mom Blog

Welcome to The Mom Blog! Thank you for visiting my blog and taking the time to read my posts. On my blog you can find things related to being a mom, mom things, as well as child and mommy or child only related activities. I will also be sharing my journey through life as a stay-at-home mom. So sit back, relax, and enjoy:  The Mom Blog. View all posts by The Mom Blog